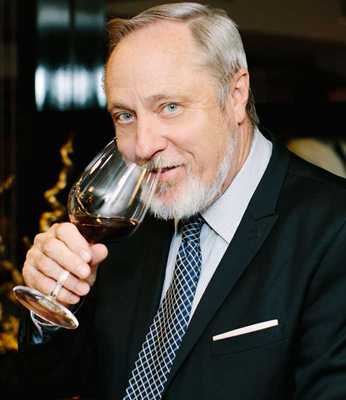 Kevin Zraly is an award-winning wine writer and one of the world's foremost wine educators. Kevin has been teaching wine for 50 years, sharing his passion with thousands of eager students from all walks of life.  He has written eight books about wine and food, including his annually updated Windows on the World Complete Wine Course, which has sold more than four million copies - making it the number one wine book in the United States.  In the fall of 2020, he will release the 35th anniversary edition of the book.  He also co-authored the definitive book about red wine – aptly named Red Wine – with The World Wine Guys, Mike DeSimone and Jeff Jenssen.  Kevin is the youngest person to receive the James Beard Lifetime Achievement Award (2011), recognized for his commitment to making the study of wine accessible and fun to all as well as for his monumental contributions to the world of food and wine. He is also one of only three people from the world of wine to receive this recognition – the other two being Robert Mondavi and Ernest Gallo.

Wine students and industry peers alike will tell you that it's Kevin's approach to wine and wine education that makes him a highly sought-after educator, speaker and writer. He emphasizes individual preference, enjoyment and the lifelong pursuit of knowledge, and shares the techniques, language and specifics of tasting wine in a way that is accessible to everyone – whether they be a novice or experienced oenophile.

In 1970, Kevin began working at ­­The DePuy Canal House in High Falls, New York, helping the restaurant earn an unprecedented four-star review from Craig Claiborne of The New York Times.  The next year, Kevin taught his first wine class – "Wine & Cheese 101."  In 1972, Kevin hitchhiked to California to visit all of the state’s wineries…all 24 of them!  Shortly thereafter, he convinced the administration of his state college to offer their first accredited wine course, “Wine History, Types & Production," which he taught to the college seniors while he himself was still a junior.  Following his graduation, Kevin traveled to every major wine region in France, Italy, Spain, Portugal and Germany taking in as much wine knowledge as possible.  In April of 1976, famed restaurateur Joe Baum hired Kevin to "Create the biggest and best wine list New York has ever seen, and don't worry about how much it costs!" for Windows of the World, located on the 106th and 107th floors of New York City's World Trade Center.  Kevin rose to the challenge.

Not only did Kevin create an award-winning wine list, he also started what became the most well-known wine education program in the world – the Windows on the World Wine School.  The school continued uninterrupted for 25 years until the tragic destruction of the World Trade Center on September 11, 2001.  Eventually, Kevin relaunched the school in a new setting and it ran successfully until he held his final class in November, 2016.  The school graduated more than 20,000 "happy" students.

Kevin is the creator of the New York Wine Experience, one of the country's most popular wine events. He also spent four years working with the Smith & Wollensky Restaurant Group, and in 2002, partnered with the legendary wine store, Sherry-Lehmann Wine & Spirits, where he started to teach his famous One Hour Wine Expert classes, a variety of Advanced Wine Courses and Master Classes.

Kevin has shared his passion for the enjoyment of wine through his books, appearances on major television networks, and through features in The New York Times, People, The Wall Street Journal, GQ Magazine and many others.  Kevin continues to teach and entertain through his virtual wine classes, dinners and events for corporations and individuals.

When it comes to tasting and enjoying wine, there are no answers. The bottom line is drink what you like and what tastes good to you! I live by Mark Twain’s commentary:

"There are no standards of taste in wine, cigars, poetry, prose, etc. Each man’s own taste is the standard, and a majority vote cannot decide for him or in any slightest degree affect the supremacy of his own standard."

Kevin, at age 19 while in college, begins working at the DePuy Canal House in High Falls, NY, as waiter/bartender/sommelier.

Kevin hitchhikes to California to visit all the wineries.

Kevin plants his first of many vineyards.

Kevin writes the first edition of the Windows on the World Complete Wine Course book.

Kevin becomes a Board of Trustees member of the Culinary Institute of America.

Kevin receives the James Beard Award for Wine and Spirits Professional of the Year.

Kevin receives the James Beard Lifetime Achievement Award for his monumental contributions to the world of wine and food.

Kevin celebrates the 40th anniversary of the Windows on the World Wine School.
© Providence WineZine

Kevin will release the 35th anniversary edition of the Windows on the World Complete Wine Course book in the Fall.

He is a consummate teacher...The book is an extraordinary distillation...lively, non-intimidating, easily absorbed.